It's my birthday today. I made it through another year, one full of hope, disappointment, change and hope again.

I was thinking of notable birthdays past: surrounded by friends in England 23 years ago as I turned 21; in Paris 21 years ago; driving to LA with a fever 18 years ago; being gloriously drunk 17 years ago with my closest friends at a huge party in my honor; eating pizza in London 16 years ago (rather a more sedate affair). Since then, it's usually been marked much less dramatically.

I was thinking about reading in an article in The New Yorker last night about Noah Baumbach, in which he said he wrote a screenplay "about realizing that you're not the young people anymore." Aging happens to everyone, but it's rather difficult to swallow, nonetheless.

I am excited to be seeing Richard Linklater's Before Midnight in a few weeks at the San Francisco International Film Festival, and watching Jesse and Celine's characters and relationship mature, just as my generation has grown up. What is left of our passions from our 20's? What kind of people have we made ourselves into? I am curious to see what tale the film tells about us now.

But before I mourn my youth entirely, I wouldn't call myself quite dead, at least not yet. I may have wished myself so, more than once, but forces have thus far conspired to prevent that eventuality. I am pleased now to have reached a place of peace where I value myself and see that I still have much to offer the world.

Who else, as on a day like today, would take my kids to sketch wildflowers at Land's End in San Francisco? Who would talk about the camera obscura and da Vinci, when Tobey asked? Who would debate the relative merits of Odilon Redon and Henri Fantin-Latour in the 19th-century gallery with Mark, who is biased against Symbolism? Most important, who would love my family as I do?

There are things that make me me; some of them are frustrating, I grant. Some of them I don't like, and I try to change. But some of them are worth celebrating, and I love the people who see and celebrate them with me. The restlessness and itchiness of youth (read: lack of faith in myself) seem to have faded. That is a huge, welcome surprise.

Thus on with the day-to-day task of living: may it bring more unexpected joys, woven in amongst the dark threads I know so well.

Today, in honor of my dear Symbolistes: Redon's Vase of Flowers, 1901, that I admired this afternoon 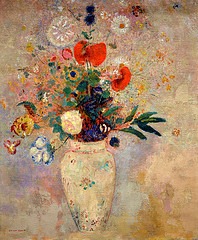 Within my young friend's heart what mysteries keep
aglow, soul from this sweet mask breathing a flower?
From what vain aliments does her candid ardor
kindle this radiance in a woman asleep?

Breath, silence, dreams, insuperable lull,
you triumph, O peace stronger than a tear,
when the heavy wave and vastness of this full
sleep in such an enemy's breast conspire.

Sleeper, golden heap of shade and surrender,
your formidable rest is laden with such boons,
doe among the grape-clusters stretched in languor,

that, though the soul be off in hell's communes,
your body with the pure belly a limp arm hides,
watches; your body watches, and my eyes are wide.