I have been nonstop busy at work recently; we are understaffed with lots of pregnant women lining up in the waiting room at all hours. It seems like people were having lots of carnal fun in November and December last year that is coming to fruition. On the one hand, there is great job security in the current state of full house. On the other, it's been horrible having to work without any breaks or dinner. Sometimes I have not even had a chance to go to the bathroom for nine hours! I know that MDs work hard, as well, but they can at least duck in to take a pee between seeing patients. We can't leave the bedside when things are difficult or acute, or if we've got multiple patients on monitors if we've no one else to watch them.

Two days ago I was with a patient who pushed for six hours and then immediately went to the OR for a cesarean when the baby refused to budge through the pelvis. Pushing with a patient is exhausting (no, not as exhausting as the mom's work, but it's still physical and mental--you have to be "on" and charting every 5-15 minutes while managing the room). Some RNs don't want to take a patient having her first baby with an epidural because it can mean pushing for hours and charting out the wazoo. Six hours of pushing was longer than a woman usually gets, but the MD wanted to be certain that the mom got a fair shake before going to what we affectionately call "the birthday party room." After night shift took over at 11:20, I still had to chart for an hour. It was a brutal shift, and that's been typical this past six weeks. I hadn't eaten since noon, and hadn't peed since 2:45. I was glad I didn't drink a lot that morning, and that I am not prone to urinary tract infections. My convent life is good on that account.

I hope this weekend we won't be short staffed. Yeah, right.

In my time off, I've been doing off-the-wall things like meeting Molly Ringwald (who was signing her new novel, When It Happens to You) in SF; going to an exquisitely fun midnight birthday party for a private showing of 16 Candles from a 1984 print a brilliant friend finagled from a VP at Universal; going river rafting outside Yosemite; and trying to figure out where to get my hair cut, since emmett, my stylist, moved to Philadelphia a year ago. He would be disappointed in me for waiting so long, but I was mourning. I am going to a wedding in two weeks, though, and I would hate to look as dreadful then as I do today.

I have also been talking to Thomenon quite a bit, and looking through the NYT at all the art exhibitions planned in the US over the next year. I may go to DC to see the big Pre-Raphaelite exhibition traveling to the National Gallery from the Tate; as Thomenon said last night, "I love the Pre-Raphs; they're so kinky." It's been nearly 10 years since I was in England, and despite seeing some British art in SF at the Legion, I very much miss my crazy, laudanum-addled guys with funky obsessions. There is also a fascinating exhibition that is traveling and up Thomenon's street, about war photography in all its incarnations. It will be stopping in LA, at the Annenberg Space for Photography. I have always wanted to write something about World War I, and read widely about the Great War and life in the trenches and its cultural impact, especially in Britain. That can be my next nerd project.

The photograph below, by Dmitri Baltermants and taken in 1942 is from the War/Photography exhibition. It shows action on the Russian front in WWII, where my father-in-law was engaged in battle on the--ahem--wrong side. But I am very glad the Russians did not kill him, or I would not have my sons. 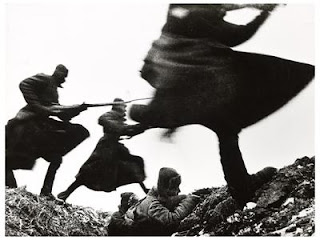 Returning to WWI for a moment: I just finished reading Caitlin Moran's scathingly wonderful How to Be a Woman, in which she compared giving birth to lying dead on the fields of Flanders and having Wilfred Owen write a poem about you, sort of. Not having lived in England in over a decade, I am out of the cultural loop, but Moran is one of my new loves. The cover of her book compared her to Tina Fey, but she's way, way darker, and I can appreciate that edge. I love both Fey and Moran--I am probably more like Fey myself, but wish I had a splash of Moran's chutzpah, as in her fashion rules, which include "Gold lame is a neutral." and "Red is a neutral."

I bought purple socks yesterday, as a promise to myself to spice up my black wardrobe. Thank you, Cate!

Oh, and my new name is Mirren.