In blogland, and in life, I have been used as a scapegoat more times than I wish. I am different, as I wrote about earlier today. I celebrate my differences, but other people--not always so much. Depends on the environment.

It is easy for groups of people, rattled and nervous, to find an individual, or groups of individuals, to blame for their collective discomfort. To label them, mock them, and send them out into the wilderness. Especially when not sending them would mean shaking or rebuilding the entire foundation of one's belief systems.

I read a very, very smart blog post on scapegoating today that resonated deeply with me, especially in the aftermath of the Circle of Moms disaster and the ensuing blaming and entitlement. Not that the wise critique and analysis couldn't apply equally well to other "discussions" I've had with people who like to tell me that my life, as I've experienced it, just couldn't have been experienced that way. There's no data! I made it up! I am hysterical! Newborn babies cannot tell who their mothers are! (Sorry, I had to throw that last one in there.) I appreciated the reminder, how in the end of the Biblical story, wandering in the wilderness, the goat was able to shake off all the burdens and walk free. It turned out well, after all the suffering. At least it didn't get its throat slit. Good on you, Goat.

I am linking to the smart post, over at What a Shrink Thinks. Have a read, and let me know what you think. Sheep need not apply. Just kidding! Sort of. I don't mean to hurt sheep feelings, but...

And in honor of Tim Clark's new appreciation of the Pre-Raphaelites, here's William Holman Hunt's odd and creepy 1854 painting, "The Scapegoat."It being a Pre-Raphaelite painting and all, an the way those men were obsessed with painting from life, I am certain that goat was spoiled! 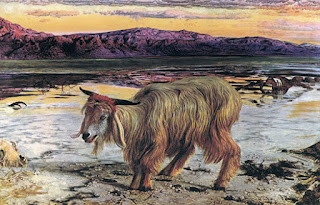 When I started my blog years ago, I had no idea how deeply the concept of living on the margins would weave itself through my life. I loved marginalia; I felt marginalized within the Midwestern community in which I grew up; I was an American living in England; I studied a field in art history that couldn't garner much respect on a good day; I was adopted. I was scrappy about all of it, and always felt that no matter what, the margins were beautiful--even when my existence was difficult. I don't feel uncomfortable where I am anymore, and I forget that others feel intensely uncomfortable when they are reminded that they are anywhere near my bad 'hood. They denigrate the margins so concertedly that they can't bear to think that they, or anyone they love (read: adoptees), have anything to do with such a place.

The other day I was reading a series of essays by Carlos Fuentes, The Buried Mirror: Reflections on Spain and the New World. I am enjoying exploring being half Spanish. I have felt an odd pull towards Catholicism since forever (must be the Inquisition in my blood). I have been to Santiago de Compostela on my pilgrimage and want to return, more than anything. I love the idea of Iberian history, the mix of Arabs and Celts and Greeks and Romans and indigenous cultures. Then languages and ideas. I want to know if, and how, I fit into all this. I don't have a real answer, and may never. But I felt a moment of recognition when I read this: "a constant of Spanish culture, as revealed in the artistic sensibility, is the capacity to make the invisible visible by embracing the marginal, the perverse, the excluded."

Okay, you say. This platitude could be applied to Hogarth's paintings of street urchins, or medieval marginalia, or many other examples from European art. It's not dissimilar from Tim Clark's "Never...more..." goings on. But yet Fuentes's focus on the margins isn't without merit. Knowing Spain's geographical placement on the margins of Europe, and how Spain's contributions to larger European conversations about art and politics have, by and large, been denigrated for one reason or another since the 16th century, what he says makes sense, even if it is written too broadly.

Why do you think, for God's sake, that Franco was such an asshole? LOL Fuentes's comment draws me to the brilliance of Del Toro's gorgeous film, Pan's Labyrinth. Yes, Del Toro is Mexican, but the film is all about Spain and its past and its odd sense of the perverse and the mythological and the marginal. It's a brutal story about a little girl lost, thrust to the margins, who negotiates a path around the dangerous shadow of her stepfather, who would rather have her dead. She must discover her own beauty in living her story.

Which brings me to why I believe certain APs and first parents have problems with some of us. When we are told that there's an appropriate "time and place" to speak out, it's because they don't want to deal with our message, or it has to be on their terms, in the light of whatever narrative they have constructed for us. Problem is, our stories cannot be neatly boxed up. Adoption colors our lives. Why are our lives considered appropriate topics only for a certain place and time? When they say, "adoption isn't controversial," "adoptive families aren't a sensitive topic," well, perhaps, except that the APs make them that way through their protestations. Adoption becomes controversial when they deny that there are trajectories, voices, experiences other than the ones they like to hear: the light, bright, sunny ones that fit their idea of what is "appropriate." Suppression of those on the margins is terrible, unconscionable.

When APs say, "I feel marginalized," and that such feelings makes them uncomfortable, but then they put me down at the same time, I don't have a lot of sympathy.

As an AP, you wonder and moan, how are you bearing the put downs? You can brush them off; they aren't (usually) meant for you. Your children cannot do so quite as easily.

The margins can be dark, can be scary. Especially if you've never had to live there. Why would anyone want to live there, you think? Let's just say there are no margins, you decide, and be done with them! Let's say adoption is not controversial, and make it so!

It doesn't work that way. I am not you. I don't have the privilege of being born and raised by the same family. Even if I had been, I might still live on the margins (remember, I am told by every second person how hard it was being raised by "biological" parents who didn't love them, whom they didn't resemble, whom they never felt at home with, ad nauseam). I don't know. I can't know about a path not taken. I still like to think that I'd be compassionate about the experiences of others instead of being against them, simply because listening to different viewpoints makes me uncomfortable.

People are mean. They will always parse words, judge, be less than supportive. You know what? Love what you do, who you are, and pick your cause. If your cause is adoptees, then don't tell adoptees that their voices aren't worth listening to because they're "negative" and "marginal"! There will always be a spectrum of opinions.

Adoption, as an institution, is broken. It truly is. We can work together to look at it critically and reform it. But to deflect from the real issues, and try to say that the attitude problems lie with "adult adoptees," or "anti-adoption adult adoptees" is to throw out red herrings and direct attention away from where it belongs: reform!

Can you face your own fears? See that it's not about worrying about how you feel, but about how your children feel? Understand that maintaining the status quo of adoption reinforces terrible abuses of people and power?
Posted by ms. marginalia at 2:13 PM 2 comments:

There have been many uncomfortable happenings of late. While everything continues happily apace with my families, I have been struck by different bouts of oddness and misfortune that have left me strangely mute over the past month.

If I hear, moreover, one more time that "most adoptees are happy," I will scream. Maybe they are, maybe they aren't. There's no study that gives us precise numbers or is able to quantify happiness. Yes, yes, I know all about the Likert Scale, and yet many of the studies out there are designed in ways that reinforce the status quo; the questions are all about certain views of happiness; and the adoptee samples are small and suspect. I would have to hear from at least a million adoptees and have more than a simple majority tell me that they're happy before I would buy the "MOST" adoptees are happy propaganda being reamed down my throat by the Rainbow Police.