A few weeks ago, I read a review of Mary Norris's new book, Greek to Me: Adventures of the Comma Queen, in the New York Times. It struck me on two counts. First, of course, because anyone enamored with ancient Greece has to be sufficiently nerdy, and because she is an editor. Second, the review made reference to the old chestnut of the hedgehog and the fox, attributing it to Sir Isaiah Berlin. With all respect to Berlin, I knew he hadn't coined this metaphor but used it to describe different Russian writers; I also remembered I had a book on my shelf (Stephen Jay Gould's 2003 tome, The Hedghog, The Fox, and the Magister's Pox: Mending the Gap Between the Sciences and the Humanities) considering the same tale to describe the nature of the humanities and the sciences.

According to Gould, the source of this tale is shadowy. I sense that it owes something to Aesop and in turn, the jataka tales of the previous lives of the Buddha, but the first Western ancient reference we have is from Archilochus, a Greek poet of the 7th century BCE. Erasmus took this up and wrote in Latin, Multa novit vulpes, verum echines unum magnum. My Latin is rusty, but the gist is that the fox creates many [solutions], but the hedgehog creates one large [solution]. Thus the fox is an agile thinker while the hedgehog does one thing extremely well with great skill.

While in some ways I wish I were a hedgehog, I am a fox. I disparage myself for being so because I don't stay in one place very long, although I return to things I love.

How does this apply? I have been thinking about where I have been, who I was, and what I have learned.

My life at this point comprises many chapters. The one in St. Louis, where I absolutely didn't fit in except perhaps at the tail end of high school. My work then was to engineer a way out, which I did. I have several memories that stand out, one of which is of my 7th grade English teacher, who introduced me to Shirley Jackson and Ray Bradbury. Mr. Sinclair's encouragement meant the world to me. He used to call me the Professor in an affectionate way, and I thought I would walk that path.

There was my life in England, spread over many years, in which I was an outsider, but being different, happily, never mattered. From primary school to Cambridge to the Paul Mellon Centre and beyond, I could be my eccentric self without remark; as one of my best friends told my husband and children, "She was always very focused." When I was in London recently, I walked through its streets and crossed paths with my ghost selves, not needing a map. I learned that London feels the most like home to me.

There was my life at Bryn Mawr, which was rocky at the time, but which I now recall fondly. I tried on many hats and many languages (over the years, perhaps seven). I self-flagellate for not becoming fluent in any, although I can muddle through in most of them. It brings me pleasure to be able to read things in the original, even if at times it is a hard slog. I adored my courses in architecture and archaeology, even the 8 AM Greek sculpture lectures with Mrs. Ridgway, who would shake her worry beads in your face if you dared doze off. I wrote an undergraduate thesis on the Assyrians and representations of architecture in palace sculpture; my committee said belatedly they wished they had asked me to stay for my master's. Tant pis. I learned that my heart is anchored in antiquity.

There was my year on the Watson Fellowship, writing poetry in the Hebrides and in Ireland, engaging with writing and history and identity. I loved the immense freedom: exploring sites, reading, meeting people. It was idyllic but of course transitory. I learned that poetry is how I feel most comfortable expressing what is hardest for me to say.

There was the long, painful time in graduate school at Berkeley, slipping about in a murderous chess game between powerful people while trying to find my footing. I entered as a medievalist and left as a scholar of the long 19th century, speaking of moving on to different fields. Oh, and my master's thesis was on an ancient topic, to add to my foxy nature. I learned that no one was going to stop me, despite the landmines and Molotov cocktails chucked my way.

Then academia and being torpedoed. Deciding to apply either to medical school or nursing school, and choosing the latter so as not to abandon my children for seven years. Nursing it was and is; I have been in maternal child nursing for 10+ years at this point. I learned humbly that bedside nursing feels right to me.

Then of course there was technical editing at Oracle during the tech bubble around 2000 and now freelance academic editing. Occasionally I write for myself, but not enough, and I still don't feel I know what I am meant to write. I know it's poetry, but I wait.

I am a restless thinker. My mind moves about at immense speed. I read voluminously: newspapers, reviews, journals, magazines, books. I also unabashedly adore popular culture and see as many films of all types as I am able to squeeze into my schedule. I make connections and love relationships between texts and in art. I think constantly about the hows and whys things are/work as they do.

It pleases me that the article I published on 19th-century design and nationalism in Britain has proved useful to people. Sometimes I think I might like to publish another academic article, but other times it seems like a frivolous conversation, given what I see at work every day: people fighting to survive, especially women and infants of color. I am stubborn and committed to finding more ways to improve outcomes for them.

All of this is me, but it is impossible to plumb the depths of it. Perhaps two, maybe three people have access to these accordion folds and my feelings about them; although I share willingly, they can't see the entirety.

Certainly at its heart, forging identity is a lifelong process (as it is for anyone else), but there is always that ghost person--the buried identity, who I might have been--who I am always chasing. Why am I this way, and how might I have been different? These are unanswerable questions with an incessant siren call. Finding my family has helped me put a few things into context. My great-great-grandmother and another great-grandmother being English may have drawn me there, despite my adoptive father's job. I don't know. Then the languages: I have always been good at learning them, but knowing about my family's history in diplomacy and being multilingual might be at the heart of my desire to speak French and German ever since I was tiny. In my bones I am the sum of those who came before me, and they speak to me, whether or not I recognize their voices and messages.

What am I doing in this life, what I am leaving that is of value? I ask myself this daily, hourly sometimes. My work in the hospital leaves me feeling that I do something worthwhile--I stand by, guard, and act as witness for women and their families in intimate moments. That said, I can't help peeling back the layers. How does all of this make me who I am? What is identity in the world of an adoptee? How can we make sure that adoptees are the ones who control this narrative about ourselves?

And while I do that, there will always be more. More questions, more seeking, more pushing myself to figure this out, running about like a fox, finding joy and inspiration in poetry, film, novels, plays, and marvelous actors like Mr. H, who touch my heart. I may sometimes be like Duerer's gloomy seraph, but I wouldn't trade my melancholy for the life of a lotus eater. Not at all. 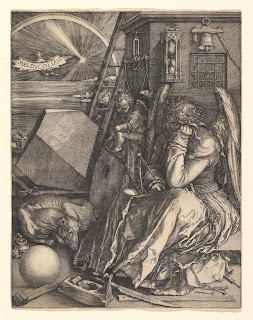