The Duck Among the Chickens

When I was in graduate school, I felt horribly at sea. I was rejected by my adviser, I was studying a topic far from the mainstream of both art history in general and the Berkeley department in specific, and I didn't have many like-minded friends around me. I found a steadfast ally in the brilliant Boreth, who has gone on to great things (mostly outside of art history: both of us see ourselves more as cultural studies/visual culture/literary types). He studied South and Southeast Asian art, and for many years I ended up by his side, hanging out with the Asian art crowd. At one point, the Chinese art professor called me the "duck following the chickens." I was the misfit, as usual: the person with, but not of, the family. I was welcomed, and I loved what I learned; I smile to remember the summer that Boreth gave tour after tour of the mandala exhibition to his rapt, ancient, blue-haired groupies, waxing eloquently on yab-yum at the Berkeley Art Museum and rocking his collection of silk scarves. 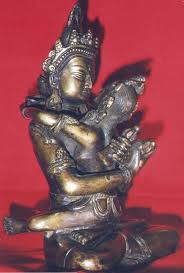 Nice digression, but back to the duck.

I was thinking today about how being an adoptee has meant that I am a duck raised by chickens. The chickens love me very much and are very supportive, but I no matter what happens, I am still a duck. They can pretend I am a chicken and call me a chicken, but it's insulting to my duck-ness.

A guest blogger wrote courageously and honestly on my friend Amanda's blog about how she felt there were differences in how she and her aparents' bio kids were treated. I can see how that might be, whether intended or not. Adoptees often don't look like their aparents or share the same talents or interests. This doesn't have to be a negative thing, and there are obviously many differences between people who share biological ties. Adoptees, however, don't share the benefit of knowing that they were born where they belong and where they can, more likely than not, see themselves mirrored in someone, if not their parents. I can imagine that having siblings who do share blood ties with the family could make things very complicated. Then you truly are a duck surrounded by chickens. Maybe the chickens are nice. Maybe not. But you are not one of them, even if your amended BC says McCluck.

It was interesting to read comments from adoptees who had grown up to become adoptive parents themselves, and there were, of course, the requisite references to being grateful that their "birthmothers" had given them up so that they could dodge horrible bullets of abuse/drug addiction/homelessness/what-have-you. I know that some people truly feel that they are better off for having been adopted. I must take them at their word. It depends hugely on the individual situation, although society in general loves to play up the idea that adoption is about providing a "happily-ever-after" ending for everyone involved. I flinch a little when people tell this particular story, even if it's true for them, because of its being the foundation of so much unpalatable rainbow-farting propaganda.

There is no way to determine that my experience with my adoptive family was better or worse than my life would have been if C had kept me. Only different. I do know that I didn't dodge a bullet so much as trade one middle-class existence for another one. My natural grandparents were better educated and more affluent than my adoptive ones. In both my natural and adoptive families, it is a given that children will grow up to go to college. C graduated from college with a double major in French and Spanish immediately after my birth and took a teaching job several months later. She was 22 and not a teen-ager. If any bullet was dodged, it was by my natural family who avoided having a bastard around to sully its "good" name in the small town where my grandparents, great-grandparents, great-great-grandparents, and many other family members lived.

I have never considered being an adoptive parent. At one point my mother-in-law asked what I would do if Mark and I couldn't conceive, and said that she hoped we wouldn't adopt because you never know what kind of horrible child you might get; yes, she really loved me. I worried about infertility, which makes no sense, but that's another one of the gifts of adoption: taking on anxiety about things that don't truly relate to you.

Infertility proved not to be an issue, and I gave birth to my two boys. I found that I love them with a feeling of connection completely new to me. I am glad that they will never have to worry about who they look like and where they come from. They are secure in a way that I will never be; that's probably the best gift I can give them. They don't have to struggle with the feeling of disequilibrium that I live with every day, as I try to build my identity on a foundation of liquid rather than solid. I have been rather more successful at this of late, but it's not a battle that's over by any means.

After having thought seriously about adoption and what it has meant for me, I know I couldn't have adopted a child. I couldn't have taken a child from his or her family and watched him or her struggling with the losses I did. There is the off chance that she or he might have been just fine to be given up and never have looked back, but raising a child with no interest in his or her roots would have been triggering for me. I cannot pretend that one family can be substituted for the other. They're not the same. Adoption comes with loss. And when I hear about open adoptions in which natural families treat adoptees carelessly or ambivalently, I am sent over the edge. I would take on the child's adopted baggage as my own, and I have quite enough baggage for myself.

If my sons ever become fathers at a time when they are unmarried, young, or that is otherwise "inconvenient," I hope that the child will either be aborted or kept. I cannot stand the thought of a grandchild of mine being separated from my family by adoption, even by open adoption, with its rosy promises of e-mail, pictures, visits, and "all that love." My grandchild is my grandchild. I will fight to keep my grandchild, no matter what. I don't want to think of another family member lost out there. It hurts too much even to contemplate. I know that as the paternal grandmother I probably won't have a hell of a lot of say, but I have very frank discussions with my sons, even now, so that I hope later on they will choose partners who think critically about adoption in the way my family does.
Posted by ms. marginalia at 12:02 AM

Your comment about worrying you might be infertile really hit me. My daughter that I placed assumed she would be infertile too. She told me "everyone in the (adoptive)family is infertie even the ones that married into the family had fertility problems why would I asume I was any different? Why would I be any more lucky than them." Is it really so much of a surprise that my daughter became pregnant at 17 with this thinking in her head?

I hear you on all fronts on this

Jeannette, thanks for commenting! I am not at all surprised. Adoptees live a live so divorced of who we might have been that we sometimes don't think logically when it comes to our flesh and what it is heir to. I had a chance to read your blog, and I am so sorry for your loss and the lies you were told at the time of your daughter's adoption. There is so much painting of pictures of things that are fantasies. Breaks my heart.

I'm a newish reader catching up on the back story. I think some of your comments about not knowing other ducks remind me why open adoption can work. It makes different issues, this is true, but for some kids they end up knowing the ducks and the chickens. My godson can call me (or his firstmom if he's feeling up to it) and ask about the ducks. Often I get random texts as he thinks of something. I think all those little texts add up to a familiarity. He's a teenager now, but he knows what he wants when he wants it. Does she like yogurt as much as he does? Although she's short, he's passed 6 feet tall already, how tall is her dad? When did his firstmom's brother start exhibiting signs of his mental illness? It all grows into a family portrait that he can have some connection with on his terms. Families are so complicated. I always felt like a duck with my family too, even as an adult. I was raised with family members that couldn't be discussed, people disappearing and reappearing, mystery. I've always been more drawn to the openness. When my godson started asking questions it just felt right to answer. He knows I know almost everyone involved in his birth, I was in the room when he was born. He is a duck among chickens, but he is kind of learning to be both over time it seems. His sister has no curiosity about any of it so far, but she has some disabilities that may be more consuming for her. I do enjoy your blog, even though I don't agree with everything you say. Good luck on your continued journey.