I noticed that members of the Open Adoption Roundtable are doing a blog hop around art that they have in their homes. I am neither an open adoption blogger nor a serious artist/collector, but as I was in my kitchen this morning, I thought that I could share some of the works I have hanging in my home and why they represent me (if it's not immediately obvious).

On my long-ago trip to India, my friend Thomenon and I went to the Jama Majid (great mosque) in Old (Mughal) Delhi at 5:30 in the morning. The light was perfect. We wandered around, talked to people, listened to the fountains, and I watched the cats with delight. I took a slide of two men, after asking their permission, as they were talking on a porch (it was going to be for teaching purposes, back in the dark ages). I was surprised how beautifully the image turned out. My husband had the slide restored and made into a picture on canvas, that we mounted in the kitchen. The scene reminds me of my trip, and I imagine the men's friendship. I can remember the coolness of the marble under my bare feet, and the smell of the city. It's intensely personal. 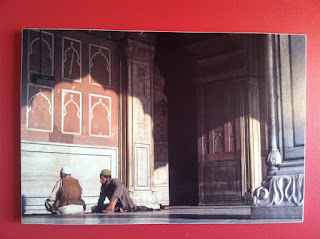 On the other side of the kitchen are two photographs. One is a documentary photograph (copy of an original from the 20's) of a lid of a casket from the tomb of Tutankhamun, from which I taught my kids some rudimentary hieroglyphs, and how to read cartouches (pretty much all I know, to be honest). I love that the form of the lid is a cartouche. 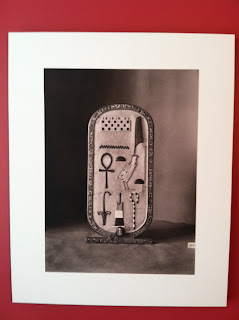 Next to it is a print of a photograph by Charles Sheeler, the American photographer/painter, who did some photography for the Metropolitan Museum in 1943. He took this marvelous shot of some arms from a Neo-Assyrian relief, showing a king, Assurnasirpal II, and his cupbearer. Considering how blocky and schematic much of Neo-Assyrian art can look, I love the articulation of the muscles and the jewelry. Sheeler made such an interesting choice in how he framed this, with the phallic dagger hilt, the snake's head on the cup, and all. It's 100% testosterone. I wrote my A.B. thesis on the Neo-Assyrians and have a very soft place in my heart for the art of these warlords. 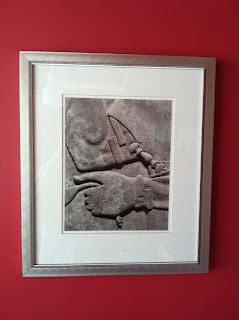 Next to my bed I have a framed print of the white hart from the Wilton Diptych, representing Richard II. I see it every morning when I awake. It reminds me of my childhood in England; my lithe staghounds, the Arts and Crafts Movement (which mined such objects for inspiration); Catholicism (it's part of an altarpiece); and peace. I apologize for the not-so-lovely photograph, but the glare on the glass was hard to avoid. (You can see my elder child, currently ill, lying in bed and reading if you look hard enough.) I couldn't get a decent picture because of terrible lighting, but I have a framed print of the scene of Virgin, Child, and Angels from the Diptych over my desk; the blue (surely expensive lapis) of the Virgin's and angels' gowns is calming, and I can always use the blessing of the Madonna. 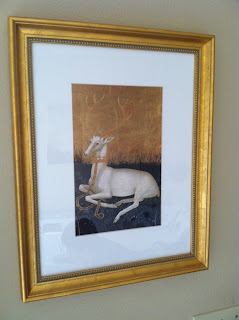 And my muse, this young woman with a stylus (sometimes identified as Sappho), watches over the living room and my collection of books. I have adored this Roman wall painting from Pompeii for decades; she reminds me of myself. When I first put this up, Dad saw her and said, "Oh, it's YOU!" 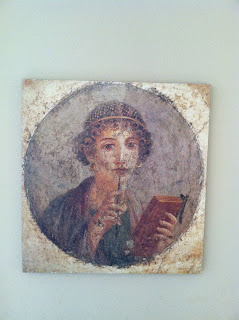 Those are some stunning pictures! I sooo want you to go the the Louvre with me one day!

I really enjoyed this post. I love the idea that art should be "intensely personal"…you inspired me to take down a couple of blah pictures in my kitchen and replace them with some more meaningful oddities that had been banished to the basement.

It's funny how art exerts its influence and claims personal space in a house. I have a beautiful pastel portrait of my grandmother that was done by my grandfather (an architect) when they were young. My grandmother was…um…controversial (think Ironsides Southern Matriarch) and when I brought it home I wasn't quite sure what to do with it. I had it in the living room but couldn't bring myself to hang it on the wall. That was like giving her authority. So I leaned it on the floor against a bookcase. That felt right - she was welcome, but only as a visitor. After my daughter was born I banished it to the guest room as some kind of subconscious protection for the baby (on the floor again, leaning against a table). But my daugher is old enough now she might accidentally kick a hole in it. So a few weks ago Gammy finally went up on the guest bedroom wall. She seems to be smirkng a bit now :-).

I have a print I bought years ago--I mean with first husband in the Louvre, around 1970--that is of a blonde head looking out toward the sea and a sailing ship. The woman is thoughtful and to me the picture is a about a woman contemplating the voyage of life. The artist is Canou.

And darn, this morning I can't find him on Google. Did before, however. Now I keep getting searches for "canoes." Not the same.