I am the "art docent" or parent art teacher for my sons' classes. The district cut funding for art teachers years ago and expect the parents to pick up the slack and teach art. Despite myself (I function much better with adults than with children, usually), I enjoy the teaching and have found ways to present material in a way that is accessible and even perhaps interesting to the kids. When they see me on campus, they'll run over and say, "Hey! Tobey's/Callum's mom! I had so much fun in art and have been doing painting on my own, thinking about the Fauves/Picasso/Baroque portraits/Rothko/Malevich!" Whatever lesson it was. I am glad to introduce them to art history and to affirm their art-making. Some day, if they ever choose to go to a museum, maybe they'll have a vague memory of what I taught them, or they'll seek out what they like. At least they have some vocabulary for talking about art.

I did a project with Tobey's first grade class last week, focused on early 20th century art and abstraction as a mode of artistic thinking vs. representational art. The students were excited and full of questions. I told them that I wanted them to paint me something abstract, using gouache. Although they were hesitant at first, they quickly became absorbed into the task I had set them. The end products were gorgeous! One of the other moms is a designer for the North Face; she took the paintings to work to mount them. She said the other designers were incredibly excited by what the children had done and asked permission to Xerox some of the children's work for inspiration. Then the other two first grade teachers came to me and asked me to lead the same session in their classrooms, guiding their parent art docents. It felt good to be of use and to put my art history training to work. Especially when I sometimes dread sitting in front of a classroom of six- and seven-year-olds.

I love sitting quietly my art books, losing myself in good reproductions (even better to be in a museum, but I don't often have the time I'd like for that). I have been hatching a plan to go to the Getty Villa to see the two-thousand year old monumental sculpture of a lion attacking a horse. Probably Hellenistic, taken to Rome as part of spolia during the Empire. 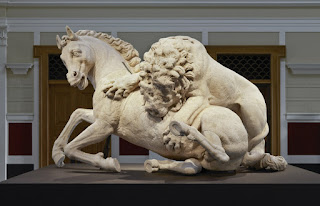 The theme of the lion attacking a horse/deer is older still than the Hellenistic period, and common in the Near East (Mesopotamia, etc.) from the third millenium BCE. There was much borrowing of ideas, cross-pollination, in the ancient Mediterranean; this process of borrowing, or seeing strands of imagination across cultures and periods continues to this day, and perhaps is even more intense, in this period of globalization. (The lion attacking a horse/deer  can also be seen as a strand picked up at times in Islamic art, unsurprisingly).

The sculpture on view at the Getty Villa was restored (to Renaissance taste) by a student of Michelangelo, who gave it the horse's head and both animals' limbs and tails. So as we see it, it is a complex work of art having different layers of artistic contribution. And it also influenced other artists, including painters such as George Stubbs, who painted the subject several times. 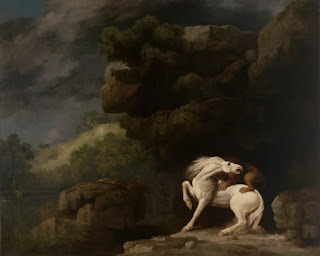 Stubb's version of 1770 seems to be more about the horse's pain and death, perhaps, than the triumph of an imperial/royal lion. The horse, in white, is boxed into a corner, shown on what appears to be a ledge. The portentous clouds and darkness and apparent lack of means of escape foreground the fear of the attack. We don't see the lion much at all, but the scream of the horse and the taut muscles and sense of the prey's fight for life, instead. The browns of the lion tend to blend into the background, although the effect appears more stark in reproduction.

This painting, in most art history circles, (besides being considered marginal and British) is labeled as hackneyed. Overwrought. Too emotional. It's the painting on the cover of my thick copy of English Romantic Verse. Too much Shelley in it, maybe?

And yet when I look at the painting as owing something to a long history of a theme, I see something more. I find it eerie and disconcerting, yes. But what about its DNA in relation to the history of art? So many people I trained with at Berkeley wouldn't know the monumental piece from the Capitoline if it bit them in the metaphorical ass. "I don't need to know antiquity," they'd sneer. "I'm studying Picasso." Lame.

Since childhood, I have found more of a home in ideas than people (unless you count portraits, as I have mentioned before, and a handful of other oddballs, like me). I love thinking about esoteric, weird things. It's just who I am. Why did I memorize the Egyptian dynasties when I was eight years old? Why did I specialize in Near Eastern art as an undergraduate? When my parents took me to the Louvre when I was 10, all I wanted to do was haunt the Egyptian and Near Eastern galleries. I told them to go see the Mona Lisa and all the modern stuff without me. I was busy.

I don't know where my fascination for antiquity and art comes from. It's not anyone's but my own, as far as I can tell. But who knows? I may be a throwback, or perhaps I am just "special". LOL

I share my interest in medicine with my brother, the physician. That was affirming to discover. He is intelligent and driven and publishes his research, important research, all the time. He mentors his residents. I admire him for his commitment to his field.

I wonder sometimes what I would have done or been had I followed my desire to be physician. What kind of physician would I have been? If I had chosen that path at 18, I would (likely) have missed out on my world travels and my chance to immerse myself in nothing but books for the 10 years of graduate school. Some of my happiest hours were researching until the British Museum and the National Art Library closed and I was kicked out. I honestly hated handing back rare books and letters and going home to my flat. I was holding a letter of Oscar Wilde's in my hands!

Until about five years ago, I would denigrate myself for being different: for living off the beaten track of my community. As I have written before, parts of my adolescence were torture because I internalized the messages that people around me would share about my being "odd." These were the same people who would argue about whether I had lived in "London" or in "England." And I let them put me down? Unbelievable. It was sad that it took me so long to say to myself, "Why do you care what these people think?" How sad that I was living my life to please people who didn't give me a second thought, except to be jerks. I believe my my self-hatred/self-doubt was part of my being adopted. People-pleasing sucks, but it was what I thought I had to do at the expense of myself (although it's truly impossible to please others all the time: the goalposts are always moving).

Everyone has strengths, and those are to be lauded and loved. As a people-pleaser, I developed mad skills of talking to people about themselves and what they are interested in and love. Who doesn't enjoy an enthusiastic audience when talking about themselves? Easiest conversations ever; I can blend into the background and smile broadly and be known as the "nicest person." I do notice, however, that it's harder to find people to cross the road to talk to me; more recently I believe it's because I have boundaries now and don't put up with certain things. I can think of a couple of examples from nursing school when apparently I terrorized people who overstepped their boundaries with me. Better than being a doormat, I say.

Cynicism aside, I celebrate difference in people; we all have things to learn from each other, which I do on a daily basis, especially at work. And interestingly enough, some of my patients who have the most challenging lives--and the fewest resources--have the most compassion and are the kindest people imaginable.

A good life, in my opinion, is all about having respect for one another, which can be a very hard thing to do. And in the meantime, I will be thinking of the lion and horse, and wondering which one I am feeling like today.

I love what you are doing with the students!! How awesome for them! And, you are encouraging their own fascination for antiquity and art!!