Spoiler alert: If you haven't seen Skyfall, you may not want to read.

I saw Skyfall today. Fabulous film, in my estimation. The writing was beyond simply clever, and I found myself thinking about triggers. Bond dealing with his parental issues, sitting in the National Gallery in front of one of J.M.W. Turner's greatest paintings, The Fighting Temeraire. 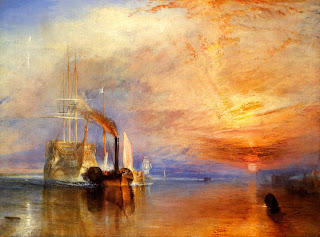 I have sat on the same bench that Bond did, to chew over problems. The Fighting Temeraire is a haunting painting, although of course for Bond, it is freighted with different layers of meaning (age, nationalism, etc.). But I get it. I bet some of the moviegoers might not understand the parallel drawn between himself and the ship, or what the ship meant in terms of Admiral Nelson's defeating Napoleon's navy at the Battle of Trafalgar, or that the National Gallery itself is in Trafalgar Square, but the writers went deeper than they usually do. The bad guy in this movie is rogue Spanish MI6 agent, even (the Battle of Trafalgar was off the Spanish coast).

And Bond's foil, Mr. Raoul Silva, had his own parental issues, fixating on M as the "bad mother" who abandoned/betrayed him.  As a result, of course, M had to be destroyed. At one point, Mr. Silva blares Charles Trenet's Boum!, one of my favorite of his songs, as he engages in torture.

I used to imagine that my own French-major mother listened to Trenet when pregnant with me. I was wrong! I had been hanging around with Thomenon and a group of French speakers, I suppose, and believed that my mother might have shared my acculturation to 1930's French music.

The layers embedded in the psychology of the main characters in Skyfall are tremendous. It was not the superficial story I was expecting, although you could certainly stick to a superficial meaning. There are not-so-subtle parts, for certain. But the overarching scheme is exquisite, down to the broken bulldog, and Churchill's War Rooms, and taking the fight "home." I cannot wait to dissect it with Thomenon.

I have been uncomfortable this week, chafing under triggers of my own. In therapy (yes, it persists in one form although I loathe it), yet again, instances of not LISTENING to me.

I lose it when I feel that I am not being heard. Or when I am not taken seriously, especially when people mock me maliciously. I know that some of my triggers are as thin as hair, razor thin. I have no use for people who play games with me on purpose, who attempt to be sly, act naive, and pretend they didn't do anything. They know. I am finished with them. Those who make honest mistakes, I may cut some slack, and let them know, and work on our relationship. I can tell the difference. If you try to play me, I am usually quite aware. That is one of my gifts.

I was thinking in particular this week about that therapist. The same one who told me that I was making a mountain out of a molehill when my brother ended our relationship via e-mail from Afghanistan two and a half years ago, because I had "only met him once." She "forgot" that he and I had been talking for nearly a year, and had a good relationship going (or so I had thought). She likened what he and I had to a "one-night stand," and told me that I was "blowing things out of proportion" when I was crying and inconsolable. Her lack of understanding made me lose all respect for HER as a professional. I turned Valkyrie on her ass, fired her and made her cry. She has begged for my forgiveness ever since (we work together now in a different capacity); she continues to ask me why I cannot forgive her. I tell her she's not my friend; she's a paid employee. I don't care about her feelings. Processing how she feels hurt that I don't trust her is irrelevant to me. I don't have to forgive her, and if she needs my forgiveness, she's doing the wrong job.

I was talking with that same therapist (don't ask) this week about a possible move to Los Angeles. I have been discussing this potentiality with her for about a month. I had told her WEEKS ago, WEEKS, that I was not thrilled about the prospect of moving. I have a life in the Bay Area. I am settled here, I have friends here. I feel stable here. I have been here for 20 years. I do not feel like a Southern California person, and a move would be very difficult, EXCEPT that LA has an amazing art/theater/cinema scene. I make special trips there to see exhibitions at the Getty, and I wish I had the time and money to go to plays there more often. I have SAID this, OUT LOUD, on more than one occasion. I am not a quiet person who is unable to articulate things.

Then last weekend, I visited LA. I found that I actually liked Silver Lake, so that if I must move, I think I will be okay. I was talking to the therapist about visiting a friend in Glendale, and she said that she'd just been to Glendale. Fine. THEN, she said: "Oh, and if you move, have you thought about how you'll have wonderful access to theater, and the Getty is there." I COMPLETELY LOST MY SHIT. Does she know me AT ALL? Had I not mentioned that at least THREE times before? And talked about my previous trips to the Getty? Why do I pay her so fucking much money to listen when she doesn't listen? Isn't listening her job? What the hell? And she acted petulantly, as usual, when I said that I was upset by her lack of attention to detail--although my saying that I visit the Getty and would love to be closer to LACMA, the Getty, MOCA, Disney Symphony Hall, are not really details. If that's not the core of who I am, what is it? I am firing her for sure. I have felt raw, ever since. What does she even do when I am in the room? Think about her grocery shopping? I get it when friends and others fade out in conversations. BUT I AM NOT PAYING THEM TO LISTEN AND BE INSIGHTFUL. What a waste of money.

I have also been thinking about moving and how moving would make my name change easier. I will be able to build a new identity there, from the ground up, as Mirren. I am finding that although many of my adoptee friends, and my close friends, take me seriously about my name change; others have thought I was being "crazy" and "silly" when I said I was changing my name. "It's a phase." Well, no. It's happening. It takes time to change one's name, but from where I stand, it feels great. If you don't listen to me, you're going to get left behind. Mirren doesn't accept bullshit.

I am glad to recognize my sensibilities (and my sensitivities) and to be able to take them seriously. I love the new freedom that comes with taking care of myself first.

I am horrified by your "therapist." I can only hope she is not a social worker-though no matter her training her lack of attention and empathy for her client is unacceptable. UNACCEPTABLE.

I hope all of your moves, physical and metaphorical, are good for your soul, Mirren.

She is, come to think of it a Ph.D. in Social Work. I have tried my best to work through my misgivings for the sake of the bigger picture, but I have had it now. Thank you so much for the support. I know that she "cares" but she is ham-handed about it all. It ends up with me feeling that I am taking care of HER, and what's the point of that? She says that I don't need to take care of her, but then she pouts and glares at me--and I have a witness. It's really bad. Unnacceptable, indeed.