I have not had the time I've wished of late to think about intellectual issues. I had been meaning to write about an interesting essay I read a few months back in the New York Times Magazine about Roland Barthes, one my favorite figures in criticism.

"'Mythologies' is often an angry book, and what angered Barthes more than anything was 'common sense,' which he identified as the philosophy of the bourgeoisie, a mode of thought that systematically pretends that complex things are simple, that puzzling things are obvious, that local things are universal — in short, that cultural fantasies shaped by all the dirty contingencies of power and money and history are in fact just the natural order of the universe. The critic’s job, in Barthes’s view, was not to revel in these common-sensical myths but to expose them as fraudulent. The critic had to side with history, not with culture. And history, Barthes insisted, 'is not a good bourgeois.'"

I appreciate Anderson's encapsulation of Barthes' project. I concur. Barthes always wanted to press beyond the obvious, to smash complacency and encourage questioning beyond the surface. "Natural orders" are nothing of the sort, generally, except when they are, and you know of what I speak. I love the idea of history being dressed not as a well padded bourgeois gentilhomme, but as a lean, hungry radical. Perhaps Chekhovian in appearance. There are plenty of myths, to be sure, and plenty of people willing to swallow them; but I also believe Barthes would have been equally disgusted by people who hewed only to facts, as though they were a religion. The Dryasdusts. The Casaubons. My friend Thomenon and I joke that empiricists, when asked what their sex is, say, "Hold on. I have to check the data."

There is always, always a place for facts, to be sure. I work in a field where facts and evidence-based practice are of huge importance for safety reasons. But at the same time, the best minds continue to question and push beyond the obvious. I was reading an article in a journal at work the other night that showed research revealing that infants born between 37 and 39 weeks gestation via elective cesarean section are demonstrating in childhood higher incidence of diabetes, asthma, and other chronic diseases. I need to do more research into the samples and the study, but this is curious. Why would this be? It could be that the the sample is skewed toward mothers who already have genetic tendencies/family history for diabetes and asthma; the populations most commonly associated with these diseases, however, are low-income women of color who do not (usually) have the opportunity to choose an elective cesarean. Why did the similar sample of women with vaginal deliveries of infants of the same gestation have children who did NOT have these problems? I know there are many, many variables to control for, but this is a curious problem. I was speaking about this article informally with some MDs and RNs, and several people speculated that there might be some unknown protective physiological processes that vaginal birth provides to an infant. We already know it's better for their lungs. There are just so many things we don't know about the human body and how the human brain works. How can we be so hubristic to say that we have the effects of infant adoption all figured out? Oh well, some people just need to feel important, I guess.

Which brings me to back to Tim Clark. I went out to get the mail and found a fresh, lovely, unwrinkled copy of the LRB, complete with his review of an exhibition of Picasso prints at the British Museum. "What fun," I thought. I can be frustrated all afternoon and read and throw it across the room when I have had enough.

I know Clark's new book is going to be about Picasso's classicism, which is potentially interesting, if he can get his classical facts straight. I hope his editors will assist him, because he had errors in his essay. Tim, dear, they are white-ground lekythoi, not white-figure. But good on you for looking at them! They are lovely, indeed. To say, however, that the lekythoi are not serious, are unserious, in fact, is rather misleading. You are denigrating again, as you do so very well! To call the subject of the vases the "thoughtlessness of life" is perhaps intelligent, as the small details make life/the loss of life poignant. Do we not all want to remember the tiniest details of our loved ones? But details are not always frippery! Alas, Sir, you call classical art a "decorative" idiom that might be able to turn the corner to pathos. WTF? Is it because it didn't exist for its own sake? Is it because this lekythos wasn't signed by a single male artist, splattering his semen paint all over the place? Puhleeze. 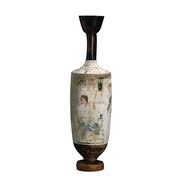 Oh, and of course, speaking of the Greek vases in the British Museum's marvelous collection, where I have whiled away many an hour: "What view of death has ever equalled these for delicacy and regret?" Sigh. If Tim were in the Royal Museums of Fine Arts of Belgium, I am sure he would say the same of David's Death of Marat. He waxes lyrical about whatever collection he is inspired by, on the day, using generic language. Where is his editor? It is immensely rewarding to know one's enemies' habits. They repeat them so very predictably.

It is also wonderful to be middle-aged, see the Emperor with no clothes, and not to feel deferential anymore. Not at all! Such a relief! I have my own brain, my own credentials, my own opinions. He, like so many others, is bound and imprisoned by his prejudices to such a degree that it's pitiable. Almost pitiable. I cannot, and will not, forgive the abuse.

Which isn't to say that the Emperor (crowned by himself, no less) doesn't have some wonderful ideas. That's the frustrating part. As enjoyable as it is to watch him hang himself, he does reveal things that I don't see, or wouldn't see on my own.

I will be going to see an exhibition of Gustav Klimt drawings at the Getty on Saturday, delight of delights. I am ready for a day of art history, at my own pace, just loving it, with no one complaining and whining.