I saw my orthopedic surgeon yesterday for another post-surgical checkup. I am almost five weeks after surgery now, and he says I am doing great. I love this doc. He has amazing bedside manner; he is both smart and gentle, and he takes time to check in about my broken bone and the bigger picture (clotting, going back to work, etc.). I would crush on my doctor a little if it didn't feel weird.

He must be about my brother's age, and even looks a little like him. Same build, blond, blue eyes, charming. I can imagine that A, if he were in a specialty that dealt with patients face-to-face, would be as kind, warm, and solicitous.

Anyway, back to topic. I remember reading something in my non-identifying information back in 1997 that threw me for a loop.

As long as I've remembered, I have had this attraction to boys/men who are really tall (over 6'1 preferably), with dark hair and green eyes (although blue is also acceptable ;-). I always attributed this to a boy I knew from childhood and loved for most of my life. (I actually dreamed about him last night--we were saving the world together in an exciting, fantastic action sequence. The dream must have been inspired by seeing the new Harry Potter film last week.) He was the first in a pretty long series of men I sought out in real life who fit this "look." [Note to self: You might have had better luck if you went with men with good hearts rather than those who looked good. Luckily, Mark is both.]

It's a type: Clive Owen/Matthew Macfadyen/John Cusack, you get the picture. Oh yes, and Irish/English. And now Michael Fassbender isn't all that bad, either.

Mark finds me endearingly ridiculous, but on my desk I have an autographed photograph of Matthew Macfadyen that Nalini procured for me one birthday. She is the best. Try not to laugh at me. ;-) 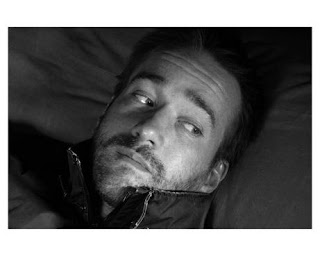 It was just my thing.

So when I wrote off in 1997 for my non-identifying information and got my twelve pages of summary, imagine my surprise when I read that my grandfather was "about 6'2, black hair, green eyes." Argh. Had I subconsciously been looking for a man that matched some genetic imprint I had in my head? Was I a weirdo? And then when I found out that my grandfather indeed came from English/Irish/Scottish stock, what did that mean?

I remember seeing the first picture of my grandfather, taken when he was about 33. I was knocked for six, because he looked so much like a male version of me, except that I am very glad that I didn't get his nose and ears.

Maybe if I'd grown up around my grandfather, uncle, etc., I would still have chased after all the tall, dark-haired, green-eyed Irish boys in town. Maybe not. Was my "type" connected to my pull to try to find my way back to the family I was born into? Was it based on some unconscious memory of my tribe? Or are tall, dark Irish guys just what I like? Because growing up around Scandinavians sure didn't make me want Alexander Skarsgard. You can have him. And yes, this is a rhetorical question.

Which brings me circuitously to Verrier. I was visiting my parents this past week and picked up my copy of The Primal Wound to reread after two years. While I concede that the lack of footnotes and scant primary research on Verrier's part are definitely, definitely problematic, I don't see her hypotheses (based on what we truly *do* know about obstetrics) as being the catastrophic adoptee-prisons that the naysayers do. Then again, they haven't even read the book!

This is what the naysayers often argue, as Verrier knew they would:

The other trend in trying to understand and eliminate the problems connected with adoption is to view them as conceptual. According to this school of thought, the problems stem from the child being told about adoption, the idea of having two mothers, the reason for having been relinquished, and the feeling this brings up for him. In other words, it is the intellectual knowledge that he is adopted which confuses and disturbs the child. One gets the feeling that adoption is only a theory, and that if we don't say too much about it, it won't have too much effect."

Her counterargument to this makes me cry, because it is the same one that Joy, and Lulubelle, and Von, and Linda, and theadoptedones, and Amanda, and many others reiterate ad nauseam:

"All of this rhetoric ignores one simple but critical fact: The adoptee was there. The child actually experienced being left alone by the biological mother and being handed over to strangers. That he may have been only a few days or a few minutes old makes no difference. He shared a 40-week experience with a person with whom he probably bonded in utero, a person to whom he is biologically, genetically, historically, and perhaps even more importantly, psychologically, emotionally, and spiritually connected, and some people would like to believe that it is the telling of the experience that makes him feel so bad!"

If you don't like Verrier, fine. If you don't feel affected by adoption, fine. More power to you. But HOW DARE YOU sit there and tell those of us who are LIVING this that this is a fucking intellectual theory. It is PART of us. It is not something we made up, it is not a planted memory. It cannot be carved out of our souls like a corrupt thought. It is not a bad joke.

I am strong enough to believe in my own memories, my own soul, my own strength. I know what I feel, and I know who I am. It may be a "fun" argument for you, but it's my life. Thank goodness for my wonderful community of fellow adoptees, friends, and family.
Posted by ms. marginalia at 1:03 PM

Yes we were there and we still are with memories, experiences and loss than can have come from nowhere else.Adoption =intellectual theory,nope, don't buy it.
Biological connection runs very deep and I believe expresses itself in interesting and often unexpected ways.For example I was in tears last night over 'Time Team' would you believe, because the dig touched a chord to do with my Somerset ancestry.